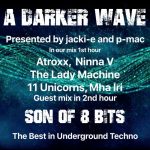 A Darker Wave, the best in underground techno, tech house, deep house and anything else we like enough to play in the show, presented by Jacki-E and P-Mac

The guest mix in the second hour is by Son of 8-Bits is from Utrecht in the Netherlands. He specialises in techno with a preference for hypnotic sounds, malignant dub tracks and relentless drums. He runs a bi-monthly podcast named ‘Infinity’ and has made tracks and remixes for various labels including Natural Behave, Reblin and 7 Seas Syndicate. He has played at various venues in the Netherlands, Japan and Spain and has done guest mixes for Minitech, Cycles, Oefenmeesters and DI.FM.