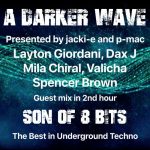 The guest mix in the second hour is by Son of 8-Bits is a DJ / Producer from Amersfoort in the Netherlands. He specialises in techno with a preference for hypnotic progression, hostile dub tracks and relentless drums. He opens his mix with one of his own tracks “I’m Not Here and You’re Not There” and he also includes three of his remixes:- ”Fear Me” by Nerubic, “Control” by Dave Mech and RUR & “The Dissentient” by Kepp which closes his set.